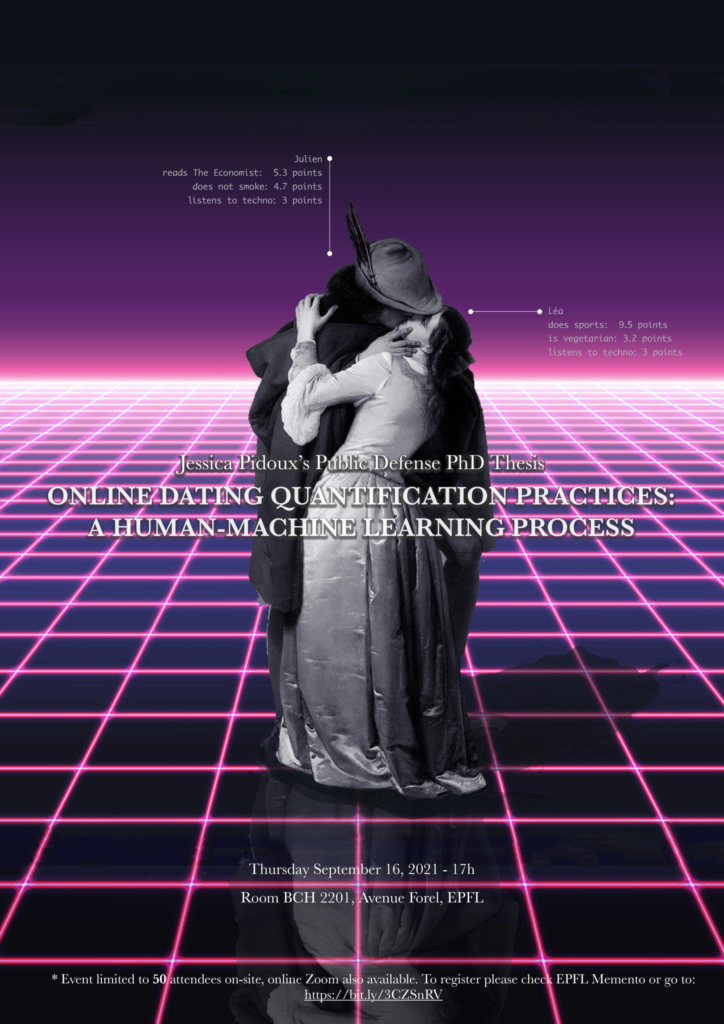 To register to the on-site event or to receive the zoom link please fill in this form.

The phenomenon of online dating via web and mobile phone applications involves several actors: graphical interfaces, developers, algorithmic systems for user matching, and users. These actors have been studied in parallel by the social sciences and by computer science. While computer science research focuses on the design of more efficient recommendation systems and on the analysis of behavioral patterns, research in the humanities and social sciences is interested in the effects of platforms and their computational practices on the formation of affective relationships.

This thesis explores how the mediation relations between the different actors of dating help to commonly establish the human-machine communication. Every actor learns in his own way a new conception of dating, mirroring the machine’s algorithmic efficiency. The study of these new dynamics of communication is bound to become key to software and algorithmic studies, for which the human-machine relationship has hitherto remained invisible in the study of dating platforms, or incomplete when it comes to analyzing developers’ practices or algorithmic systems without taking into account the final uses of the platforms.

Using a combination of qualitative and quantitative concepts and methodologies from sociology and data science, this thesis contributes to the comparative analysis of four actors who have a profound impact on the experience of online dating: graphical interfaces, developers, algorithmic matchmaking systems, and users. This is a study of more than 320 variables collected in more than 20 dating applications, both English and French, used in Switzerland and around the world. These variables mediate between the design of profile recommendation systems and their final use for dating. A case study is conducted on the massively-adopted dating application Tinder, which acts as an industry innovator, capable of establishing design conventions (e.g., swiping). This thesis further investigates, on the one hand, the development practices of nine founders and developers working in the industry, and on the other hand, the practices of 40 users of 26 different dating platforms.

The results show that the interaction with dating platforms involves a collective learning process of experimentation that allows for communication between humans and machines. This fast-paced communication favors trial-and-error practices: actors either learn to adapt to the machine, or on the contrary to overcome it by accepting the mutual tolerance stemming from the uncertainty of actions. Learning is possible through the supposed social conventions of the actors, some of which are made explicit and quantifiable through graphical interfaces. First, the interfaces present a conceptual model of use that makes explicit how to present the attractiveness of oneself, how to capture attention, and how to measure the performance of this attractiveness that is constantly updated according to the dynamics of the reputation economy. Secondly, the practices of developers are guided by the economic interests of dating companies. Dating is made quantifiable by imitating other successful applications, exploiting the developers’ personal experiences, and by taking into account the machine’s capabilities. This produces a reduction and a heteronormative standardization of the conceptual models of dating. Thirdly, the Tinder application case study shows how it favors an average ideal match modeled on sociodemographic factors through the swipe-imposed reduction of individual preferences. Finally, users learn to systematize their actions by mirroring the machine in order to fit into the reactive and competitive view they have of an application. However, there is also a personal reclaiming of the dating experience that allows individuals to step outside the machine-like framework of the application to foster other practices inherent in human capacities.

This thesis contributes to the described research field with a theoretical framework and empirical data which can guide future research on online sociability at the intersection of computer and social sciences, like in the digital humanities.

14-07-22
Jobs and calls
The UNIL-EPFL dhCenter ceased its activities on December 31, 2022. The contents of this site, with the exception of our members' pages, are no longer updated. Thanks to all of you for having kept this space alive! More information