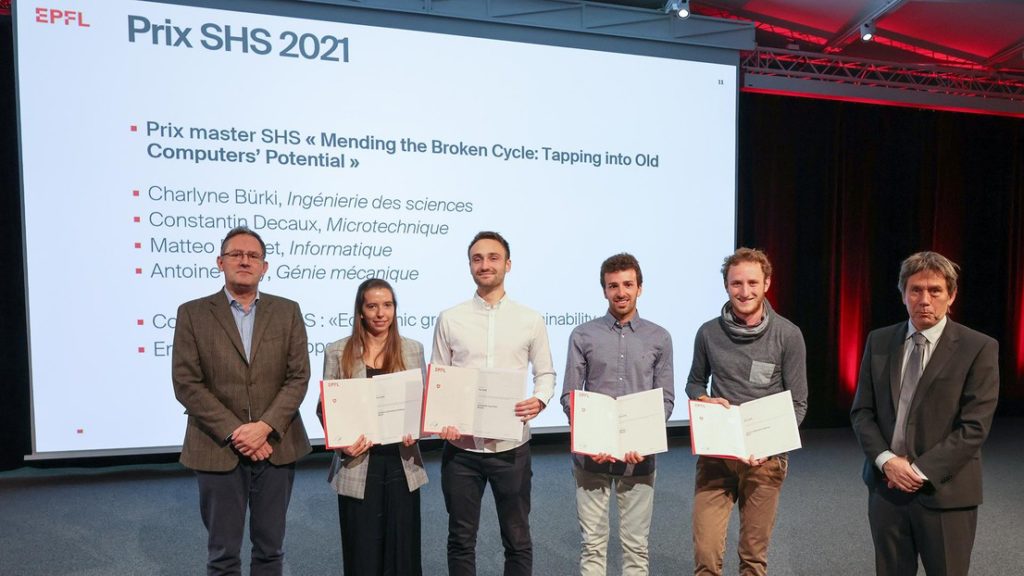 EPFL’s annual Social and Human Sciences (SHS) Prize has been awarded to a team of four master students for their semester project, which retraces the complex (and often destructive) routes travelled by computers, cell phones, and other electronics after they’ve been discarded in favor of the latest model.

They received the prestigious SHS Prize for their project, “Mending the Broken Cycle: Tapping into Old Computers’ Potential”, which they completed as part of the course “HUM-470: Economic Growth and Sustainability”, led by Philippe Thalmann, in the College of Humanities SHS program.

The students’ project report opens with a vivid image. “Linking a Tokyo 2021 gold medal to an elderly Japanese woman’s phone is not rocket science – the latter makes up the former,” they write, going on to explain that the International Olympic Committee produced the 5,000 medals for this year’s games using recycled WEEE (Waste Electrical and Electronic Equipment). However, this symbolic example of WEEE recycling doesn’t make a dent in the megatons of phones, computers, and other devices discarded worldwide each year.

“The global production of e-waste matched the weight of 5,000 Eiffel towers in 2019 and is projected to double by 2050,” the students explain, emphasizing that these devices “hold hostage” increasing quantities of precious metals like gold, platinum and palladium. “A particularly vicious weakness of existing collection systems is the informal treatment of e-waste, which usually involves illegal export to developing countries.”

The team therefore focused on the environmental and social burdens imposed by foreign WEEEs in Africa, as well as the thriving second-hand goods industry that has been born in response to these exports. Specifically, they analyzed the extensive network of resellers making up the second-hand good market in Lagos, Nigeria, as well as the impacts of e-waste destruction in Ghana. They concluded by proposing market-based regulation in the form of taxes and incentives; technological improvements to informal recycling processes; and gradual systemic improvements that start with raising awareness of these issues in Europe and the US.

The students say the SHS course challenged their “naïve” prior view of e-waste flows from the Global North to the Global South. “It encouraged us to look for a deeper understanding of this phenomenon, and for realistic solutions backed by available data.”

They also observe that, ironically, the same electronic tools at the center of their investigation also gave them access to firsthand data, and powered their interdisciplinary collaboration, which took place primarily via Zoom.

“Our project turned out to be an eye-opener for us all. Although it is on a topic far from our specializations, it was an opportunity to combine the skills we have acquired throughout our individual academic journeys. Ultimately, our different backgrounds proved crucial in understanding a complex reality, and also catalyzed richer discussions around this exciting topic.”

The SHS Prize has been awarded since 2012 to master’s projects conducted by individual students or groups of students within the framework of a master’s-level course in the CDH’s SHS program.

The honor comes with a prize of CHF 1,200, following a vote by the SHS teaching committee. The prize rewards exceptionally high-quality, original projects that illustrate the contribution of social and human sciences in technical education and training.

This article was originally published on 11.11.21 by EPFL CDH