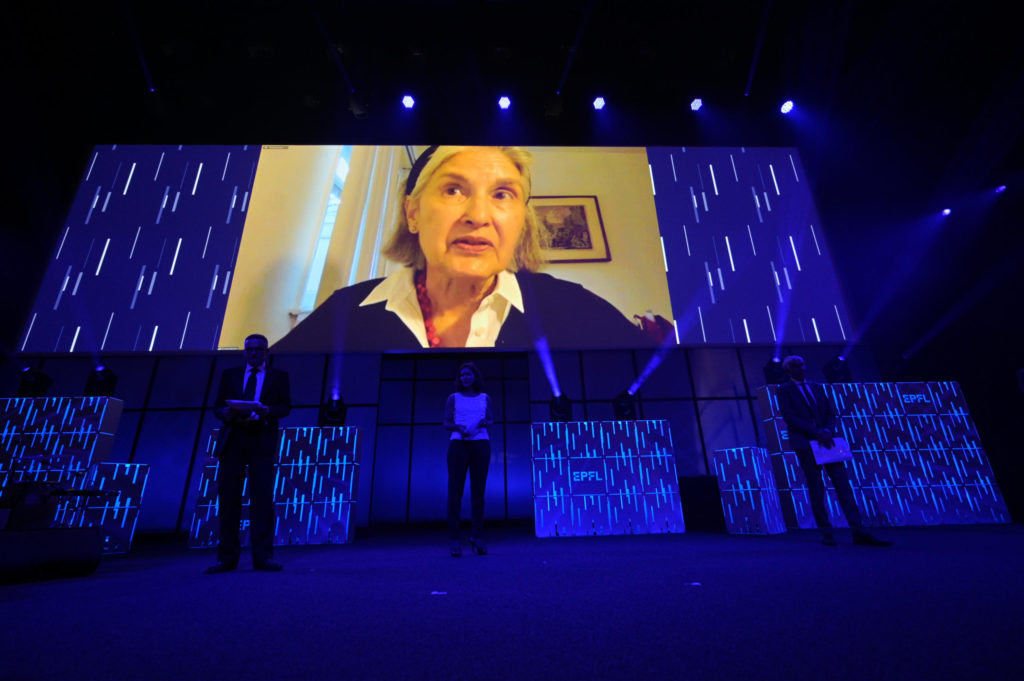 Lorraine Daston is a leading authority on the history of science, and director emerita of the Max Planck Institute for the History of Science in Berlin. She directed Department II of the Institute for 24 years, hosting nearly a thousand scholars in that time. She is also a visiting professor at the University of Chicago.

EPFL selected Daston to receive its honorary doctorate “in recognition of her driving role in broadening our understanding of the history of science and technology, and of the exceptional work she has done leading collective efforts at the Max Planck Institute for the History of Science in Berlin, initially as department head and subsequently as director.” The degree was awarded during the annual graduation ceremony, Magistrale, on October 1st.

“While the history of science was once considered a somewhat obscure specialty, science is now at the heart of the study of history thanks to the remarkable work of Lorraine Daston,” says dhCenter member and CDH professor Jérôme Baudry, head of the Laboratory for the History of Science and Technology (LHST), who proposed Daston for the CDH nomination.

“Her many books and articles have inspired generations of historians of science, including my own. I am delighted that EPFL has chosen Lorraine Daston and the history of science for this honorary doctorate, as I believe that the discipline can contribute much to the education of future engineers and scientists.”

Daston’s interdisciplinary work brings together cultural studies, literature, philosophy, sociology, and anthropology to investigate, in her words, “categories that structure our thought, pattern our arguments and proofs, and certify our standards for explanation”.

During her career, she has shown that the meanings of concepts often encountered in science – such as reason, rationality, fact, and objectivity – are far from universal, and have varied and complex histories.

As the author of many publications in the history of science, Daston has notably written on the history of probability and statistics, the emergence of the scientific fact and objectivity, and scientific models. She is the recipient of many scholarly awards, including the Dan David Prize in the history of science, the Sarton Medal for Scholarly Achievement, the Schelling Prize of the Bavarian Academy of Sciences and Humanities, and the Lichtenberg Medal of the Göttingen Academy of Sciences and Humanities. She is also a member of the Académie Internationale d’Histoire des Sciences (Paris) and the American Academy of Arts and Sciences.

This article was originally published on 15.10.21 by Celia Luterbacher, EPFL CDH.

Before and Beyond Collegiality: The Long History of University Governance

How to compete with robots