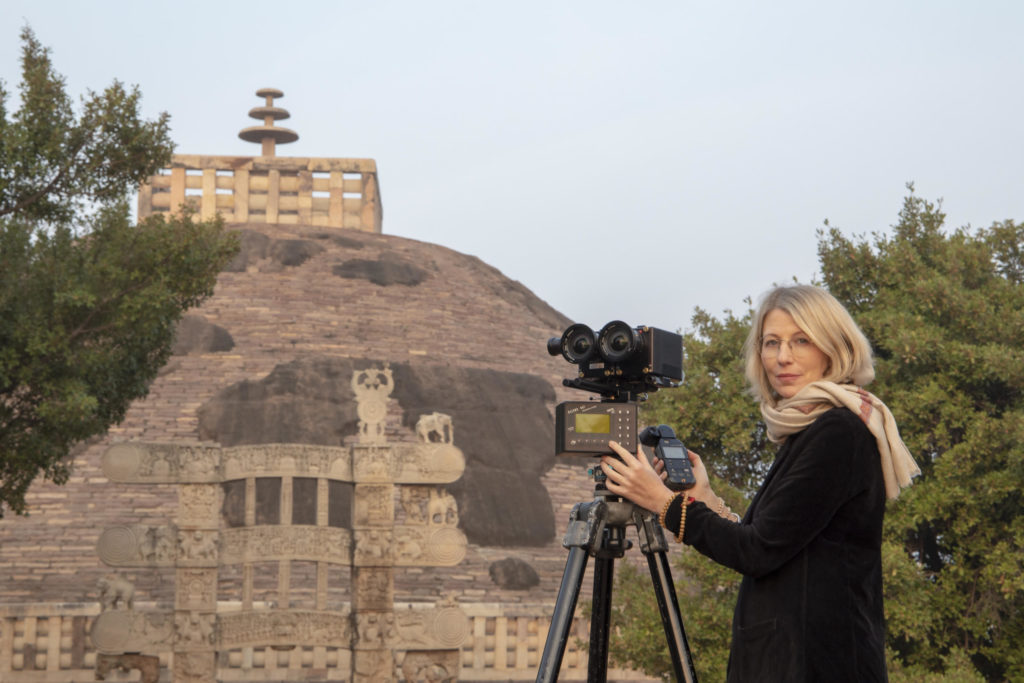 In this article, originally published as part of EPFL’s Summer Series, Sarah Kenderdine, head of the Laboratory for Experimental Museology in the College of Humanities, talks about how she has spent the last four years tracing, photographing, and digitally reconstructing the seldom-told story of Buddhism’s maritime spread across Asia.

Since 2016, Kenderdine, along with a small research team, has visited hundreds of cultural and archaeological sites across southeast Asia. Challenges have ranged from bureaucratic (gaining access to sacred or government-protected sites) to logistical (lugging bulky photographic equipment, including a mini-fridge full of film); and even physical (braving dangerous weather, six-hour traffic jams, and political unrest).

But the visualization and cultural data expert, who joined EPFL to lead the Laboratory for Experimental Museology (eM+) in 2017, is unfazed by these experiences. For her, travel – and the risk and unpredictability that go with it – are just part of the job.

“I was brought up travelling, and it has always been required for my work. Prior to EPFL, I worked as a maritime archaeologist, and after becoming a digital scholar, I became interested early on in virtual heritage. So, travelling to document sites and to create exhibitions – which themselves travel – is really just part and parcel. But the Atlas is my most ambitious project yet, in terms of the number of sites and countries.”

“The Atlas” is the Atlas of Maritime Buddhism: a vast, virtual exhibition that will be unveiled in Taiwan in May, 2021 following a yearlong delay due to the COVID-19 pandemic. The permanent exhibition will be complemented by a customizable travelling version of the Atlas, which Kenderdine describes as an interactive “deep map” that tells the story of the spread of Buddhism through the seaports of southeast Asia and the South China Sea, from the 2nd century BC to the 14th century AD.

Kenderdine calls the chance to visit and document these sites as part of the project “a real privilege”.

“Some of the sites are utterly sublime: they are so active and alive, unlike many European sites, due to the Buddhist pilgrims who visit them,” she says. “There is the marvelous Golden Rock in Burma, which is perched on the edge of a cliff and looks as though it could fall off at any moment. The pilgrims add layers of gold leaves to it. This is a common practice by devotees, and some sculptures in the region are so encrusted in gold that they become bulbous and strange-looking, because they are so adored.”

A fusion of history and mythology

The Atlas of Maritime Buddhism is notable for bringing a maritime perspective, which has never before been told in the public domain, to a history that is usually recounted based on artifacts from overland trade routes such as the Silk Road. It achieves this through thousands of stereographic, 3D panoramic, and ultra-high-resolution gigapixel images of natural and historical sites, monuments, texts, sculptures, and other artifacts from across southeast Asia.

When completed, visitors will be able to take an immersive virtual tour – heightened by 3D sound recordings – through both space and time, via a pioneering deep mapping data browser: a navigational interface developed in a 360-degree, 3D (omnidirectional) virtual environment.

The herculean effort to capture, organize, and bring to life the images and sounds from hundreds of sites and thousands of artifacts requires expertise in data science, photography, archaeology, history, cultural and religious studies, and geography. But Kenderdine sees herself primarily as a storyteller.

“It’s all about how you tell the story: We want to create a narrative out of all the heterogeneous data from all these sites. This is challenging, because there is a tradeoff between the scholarship and what is coherent and attractive to the public in a visual sense.”

Kenderdine is working with Buddhist colleagues and Buddhist scholars – notably Lewis Lancaster, an emeritus professor of the Department of East Asian Languages at the University of California, Berkeley – to piece together the narrative, which begins in rock-cut caves in India.

“These sites are incredibly rich with phenomenal history, but it’s not just history and fact: it’s a fusion with myths and Buddhist relics. And it’s not for us to say which narrative is correct; that’s what belief systems are all about. I think recognizing the malleability of the story is important.”

Source: Celia Luterbacher, EPFL, 04.08.2020 “We want to create a narrative out of all the heterogeneous data“